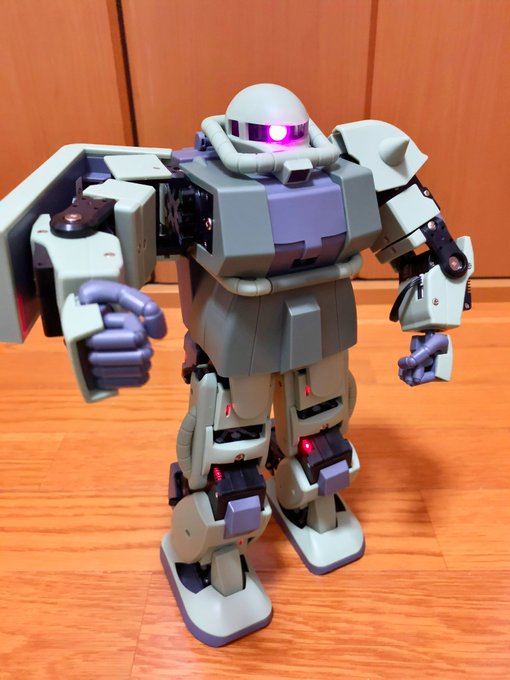 What is ZEONIC TECHNICS?

ZEONIC TECHNICS is a bipedal robot course offered by Bandai. It is based on Kondo Kagaku hobby robots, and many of the parts are from Kondo Kagaku. The humanoids offered by Kondo Kagaku, such as KHR, have a plain black and white design, but this work is based on Zaku from Gundam, and a lot of effort has been put into the exterior of the robot. In short, it is a Moving Gundam Model.

When it arrived, nothing is assembled and you must assembly by following the instructions. The assembled Zaku can be controlled by Kondo Kagaku's HeartToHeart4 software from Windows or iOS/Android app. 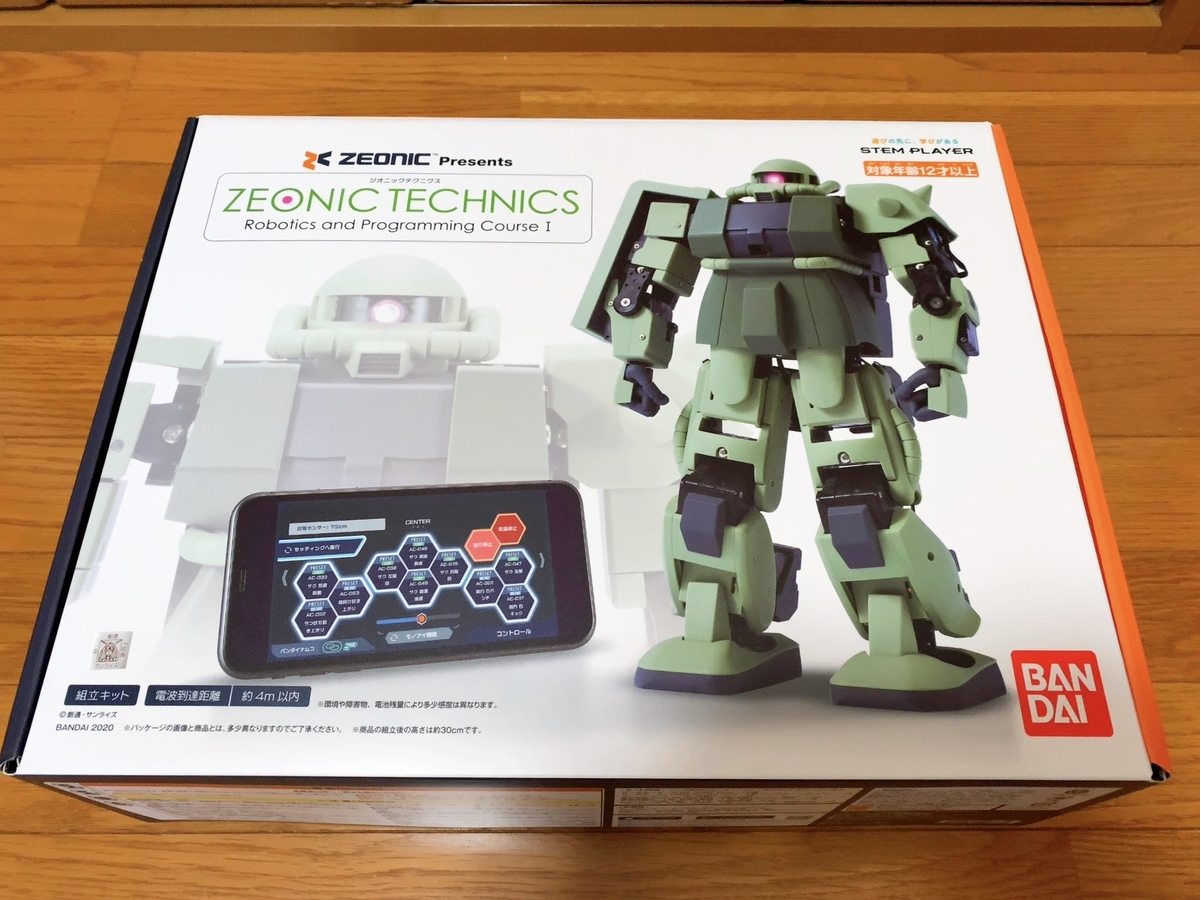 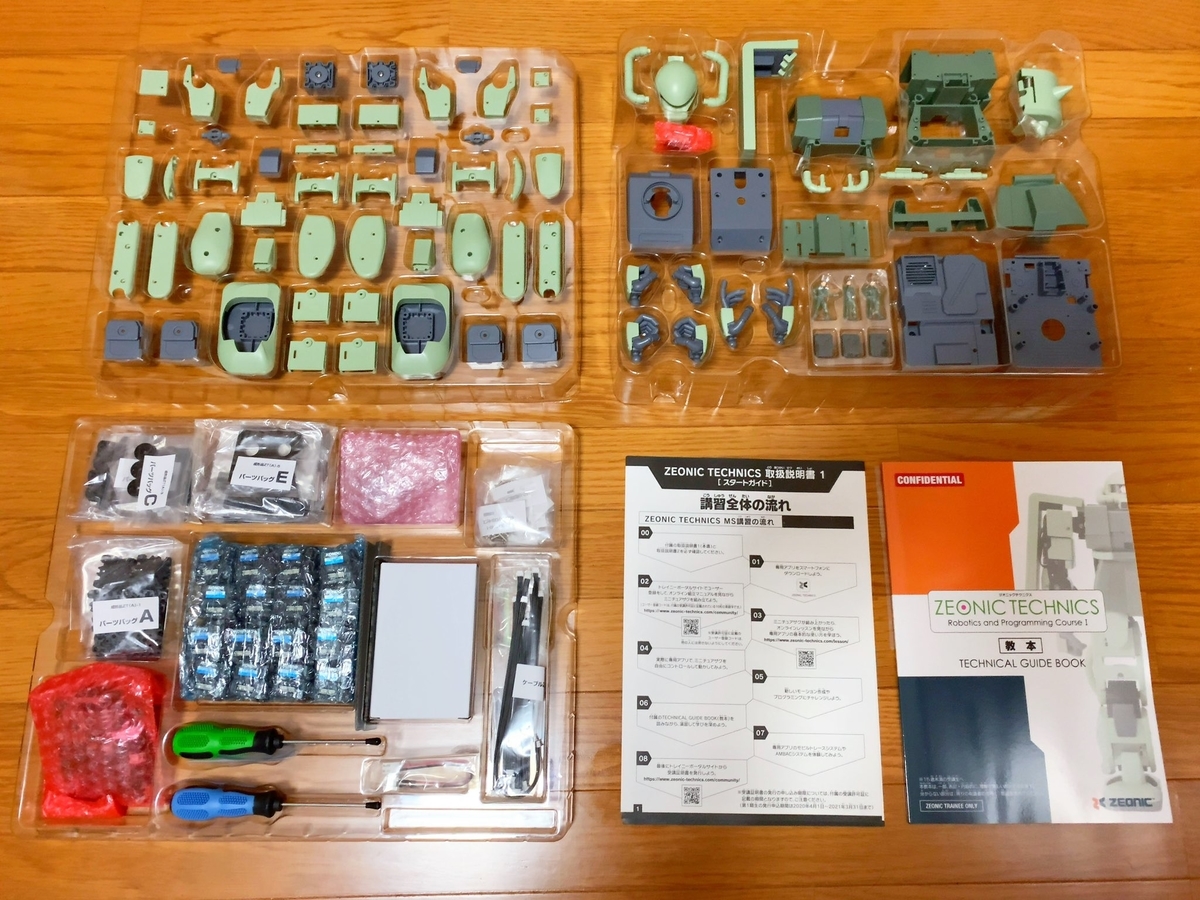 All in one box.

The box includes a screwdriver, so the assembly can be completed only with this box, but the assembly manual needs to be downloaded from the Internet. The manual is in black and white. It would have been easier to understand if more colors were used.

As in the case of assembling my custom PC, it is easy to see the dark area with a penlight.

It seems that if you use Robot Yuenchi's assembly service, you can have it in assembled status about 8 hours.

It took a total of 28 hours for me to assemble it. The pros are 3 times faster. I'm from a mechanical engineering department anyway...

The area I got stuck on are summarized in serial tweets.

After assembly, you can control it from an app on your smartphone like Scratch. The control is built with if clause and counting loops. Zaku has an IR sensor to the front , so you can use trigger when it comes near something.

Posing can be done by the movement of servos. The Kondo Kagaku servo has a function to transmit its own position to the control, so you can register the posing like playing with a doll.

Kondo Kagaku maintain a software called HeartToHeart4, which allows you to transfer your own motions (Windows only, since it depends on .NET Frameworks). However, the transfer cable, Dual USB Adapter HS, must be purchased separately (6,000 yen without tax).

The feel is very basic, and the servo angles are directly specified, so you may be surprised if you are using it like MikuMikuDance or Unity's Humanoid.

Once the motion is written on the board, it can be executed from a smartphone app.

I spent my weekends and after work to assemble it. It took a long time. I think I would have failed if it were the other robot. It's great that it's a Zaku that everyone knows, because I can imagine the finished product.

I also like the fact that it has speakers on the board. Even when the robot is not yet fully assembled, the cool sound effects and voices are very entertaining and motivating.

Some humanoid robots for hobby use are sold in the market with wheels on their legs or with legs that hardly move at all. ZEONIC TECHNICS Zaku walks on two legs (although it slips a little) and can do high kicks. I was impressed that it could go from prone or supine to upright on its own.

Yes, Zaku is smaller in size and has fewer servos than the Premade AI. There are no servos for the wrists, and the range of motion around the face and neck is limited. Especially if you want to make it dance, you will want to have wrist parts. On the other hand, when posing it as a combat robot, it looks pretty good, which I think is a good thing.

Gunpla needs reading instructions and assemble parts silently. Zaku has a dedicated website, and many parts are explained in videos. It is easier to understand and more than just reading. It was good to supplement the manual by video since the small number of colors are a bit hard to understand.

Compared to the Premade AI, which was sold for several tens of thousands of yen last year, the price is high. Well, Premade AI was too much in the red. However, in the current market, one side is assembled for about 100,000 yen as well, and the other side has already assembled, so there is a difference.

I thought it was hard to get to the programming part when you look at it as a STEM education material. The exterior is elaborate, but there were many operations to remove and attach screws, and the many screws reduced efficiency. If the next version is to be made, the fastening structure of backpacks and other parts that are frequently opened and closed could be changed, and the sharing of screws could be promoted a little more.

As well as the price, I don't see many people on Twitter playing together. And most of them are adults. I think the original concept was to make it controllable from a smartphone app so that even high school students could do it.

I would like to combine higher level control than HeartToHeart4. I know the manufacturer wants to sell the hardware, but I wonder if it would be difficult in terms of budget to introduce it in schools, etc. unless it is one unit for a class or group rather than one unit for each person.

I have heard that when the founder of Pebble was developing a smartwatch, he was advised by a mentor at Y Combinator to create an SDK, which turned out to be a good idea. Working with wired devices can be a pain, so it might be a good idea to make a hackable machine by creating an API that can be called wirelessly from Python, which would increase the number of developers.

As I came into Gundam from SEED and Wing, the mobile suits in Gundam are Gundam. I haven't watched the recent Gundam. I was wondering if Zaku is mostly in the old series and all the recent ones are Gundam. I feel that Gundam is better for young people for STEM educational purposes.

I think one pain point is the size of the servos. The smaller the size of the robot, the more noticeable the servos are. The servo size determins the restrictions on modeling. It is not so bad if the robot is fat because it is a Zaku, but if it is a slender Gundam, the servos would be too large.

I don't have a solution for this, but when I was in college, I remember seeing an actuator that used a shape memory alloy. If miniaturization progresses, or if the patent for such a small actuator expires, hobby robots may change.

Fiction and reality is mixed

There is a control system in Gundam called AMBAC that appears in the instructional book. The Gundam setting of the story is well done. It is written so openly in the textbook that I thought it was the real way of controlling robots until the very end. It may be a little confusing as an education because there are parts of the website that have such a mixed view of the world as well.

When I was a high school student, I chose the mechanical engineering department of the university because of WABOT. Unfortunately, I became interested in programming and ended up in a thermal laboratory doing numerical calculations, but I am deeply moved that I was able to complete a humanoid 10 years after graduation.

Examining the possibility of porting tools made for Premade AI.

How to run Emacs macro via CLI without … »
Search
Profile