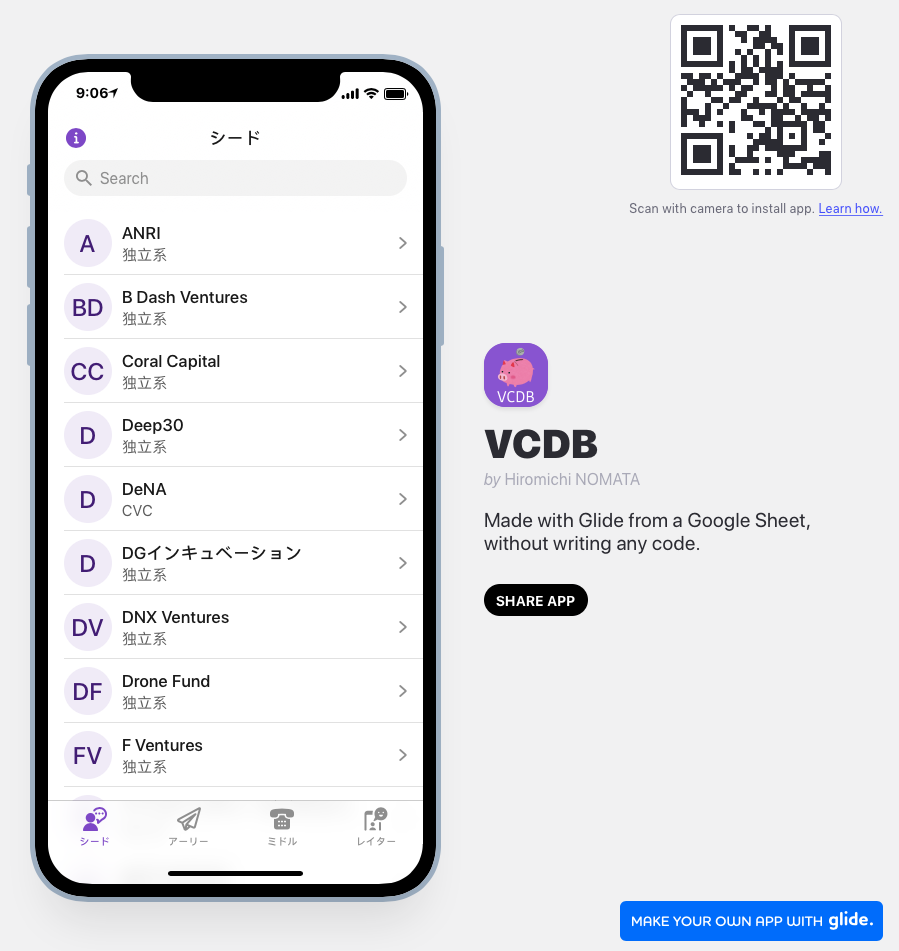 Two years ago, I surveyed the fund size of Japanese venture capitals. I ended up just searching at that time. Visualization was only HTML table.

Thanks to no code trend, inputting Google Spreadsheet can generate simple PWA app recently. VCDB was updated to Glide app as v2.0.

In this context, app means not native app on App Store. App means mobile web app. Since it supports PWA, you can register app to smartphone home.

The other no code tool like Bubble need setting up many configurations because there are many custom options. Glide spec is simple and due to this, making MVP is much easier.

Venture capital has multiple funds. One fund can be managed by multiple VC. many-to-many relation.

However, if I were CEO, the fund name is not so important because CEO or CFO wants to know who they should meet. I pushed all information to one single vc table.

Like Heroku, Glide plan is limited by the number of rows. Normalization is not good at least for free plan.

The icon of seed, early, middle, later is coordinate with technology change, direct talk, letter, telephone, smartphone. Initially I tried to use animal, but animal icon was only available in Pro plan.

The default of Glide icon is the first letter of the list item if the image is not set.

We have to validate the statement of VC. One VC says we invest on early stage and later stage, but each capital has each criteria. Also, sometimes the amount of investment is not listed on press releases.

I took opinionated way and I assumed max investment size is 1/20 of fund size.

Phase is categorized as

Based on Japanese Venture Capital Association list, I added VC from press releases. I regularly update the list, but if you know the missing VC, please let me know.

Software Engineer(Freelance). Full-stack from coding to management. Play the guitar.